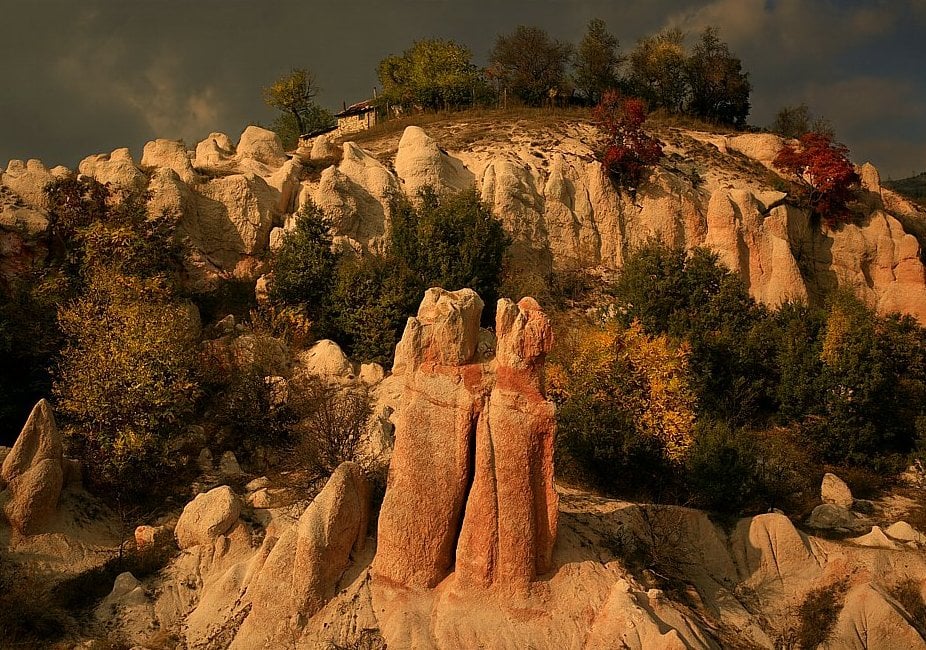 The rock phenomenon called “Stone Wedding” is located near the village of Zimzelen, a few kilometers east of Kardzhali. The rock formations stretch over an area of ​​about 40 acres and represent a truly beautiful view.

Like the Rock mushrooms near the village of Beli Plast the nature forms all strange forms. Tens of millions of years ago, as a result of underwater volcanic activity, rocks were formed – rheolite tufts. Later, as the sea retreated, the rocks were exposed to the rain, wind and sun, and these elements shaped their present forms. Different minerals in the rock are also responsible for the variety of colors and shades.

The name of the rock group – “Stone Wedding” – is given because of several rock fragments forming a group that, with some imagination, can be likened to a group of people. Two legends are known about this phenomenon. According to the first, the bride and groom were fossilized by God because the father-in-law angry with his wicked thoughts about the young bride.

The second legend states that there was an old popular belief that the face of the bride should not be seen during the wedding. But a strong wind blew, lifting the veil and face of the young woman, was seen by all. For punishment, the forces of nature punished all those present and petrified them. Read more…

We are in a difficult and unpleasant situation to fight the COVID-19 virus. We have to follow unprecedented measures to protect our own and the health of our friends and family. Let’s get out of the polluted cities and meet weekends and days away from VIRUS. In this connection I have the pleasure to invite you to visit the guest house “Birch” in the village of Glavatartsi on the shore of the Kardzhali Dam at the foot of the Rhodope Mountain.
For the time of 14.03.2020g. to 14.04. 2020 we reduce by 30% the prices for double room accommodation.