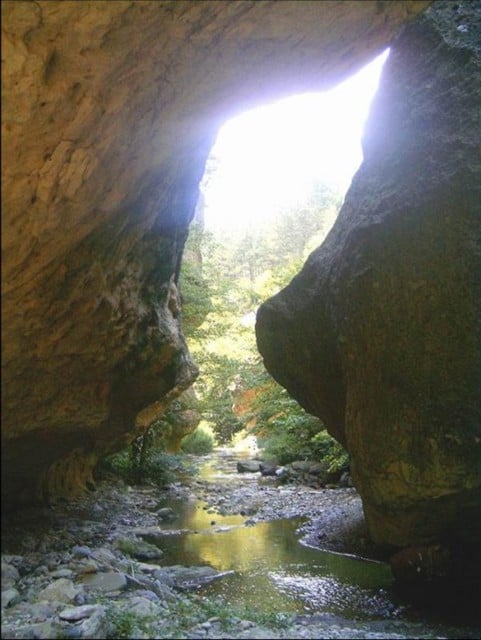 The “Rock window” natural landmark is located near the village of Kostino, in an area with an exceptional landscape. It is a natural landmark formed under the influence of a lush gully that passes beneath it. This is a magnificent rock bridge hanging in the air supported by two columns with a canvas cut off all sides. In the geological past the columns were three, but the natural forces split the canvas between the second and third columns and today is a large stone sponge whose head is part of the canvas. The height of the bridge is about 10 m, the length is 15 m and the width is 7 m, the thickness of the canvas is 1.5 m. equally tall, build massive green volcanic tufts, without layering. The flat is white, sculptured by thin white limestone, very resistant to erosion processes. This is the reason why it sticks over the columns. The rock window was formed at the same time as the Stone Wedding and the Stone Mushrooms, formed from similar materials and similarly.

We are in a difficult and unpleasant situation to fight the COVID-19 virus. We have to follow unprecedented measures to protect our own and the health of our friends and family. Let’s get out of the polluted cities and meet weekends and days away from VIRUS. In this connection I have the pleasure to invite you to visit the guest house “Birch” in the village of Glavatartsi on the shore of the Kardzhali Dam at the foot of the Rhodope Mountain.
For the time of 14.03.2020g. to 14.04. 2020 we reduce by 30% the prices for double room accommodation.